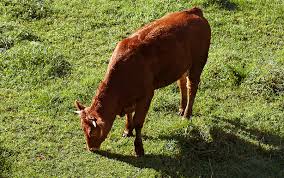 We know that the offering of Yeshua as a sacrifice can be symbolically attributed to all the various Levitical offerings outlined in the Torah. In this, we recognize the work of Yeshua and value His purpose for being sent. This doesn’t mean that Yeshua did away with the sacrifices of old, but rather that He was symbolically a manifestation of them in a variety of ways.

One such sacrifice that ties in with Yeshua’s death is the sacrifice of the Red Heifer found in Numbers 19. Let’s break down the comparisons.

The Red Heifer had to be completely red. (Numbers 19:2)
Yeshua became covered in his own red blood from lashings and beatings. He also wears a robe dipped in blood. (Revelation 19:13)

The Red Heifer was the only female animal that could be offered to God. (Numbers 19:2)
Yeshua was betrayed for 30 pieces of silver, the price of a female slave.(Matthew 26:15, Leviticus 27:4)

Without spot or blemish

No burden upon it

The Red Heifer could not bear any burdens. (Numbers 19:2)
Yeshua’s cross was carried by Simon. (Matthew 27:32)

The Red Heifer was sacrificed outside the camp. (Numbers 19:3)
Yeshua was crucified outside Jerusalem. (Matthew 27:33)

Anyone could slay the Heifer

Slain before the High Priest

The Red Heifer’s ashes are gathered by a man that is clean. (Numbers 19:9)
Joseph of Arimathea gathered Yeshua from the cross. (John 19:38)

The Red Heifer’s ashes were mixed with water and used to cleanse people from being unclean after coming in contact with the dead. (Numbers 19:9)
Yeshua’s sacrifice cleanses from death.