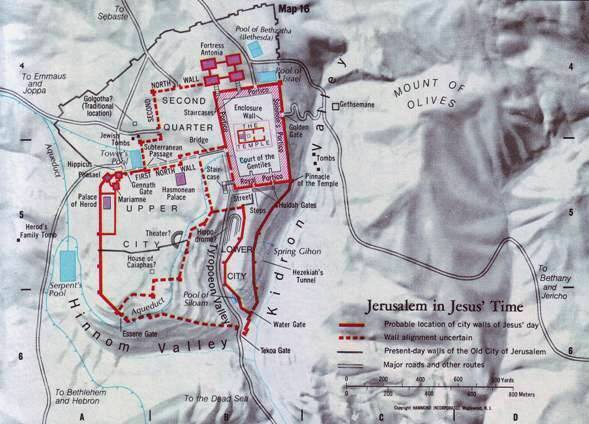 Then returned they unto Jerusalem from the mount called Olivet, which is from Jerusalem a sabbath day’s journey.

When I was in Israel last year, we actually walked from the Mount of Olives to the Temple inside the boundaries of old Jerusalem. It took about 15-20 minutes to walk down the Mount, through the Kidron valley, and on up to the Temple. Even the elderly in my group were able to do it.

So how could the text say that this is a whole Sabbath day’s journey? Well let’s take a look at one of the Jewish laws (not God’s) that has to do with traveling on the Sabbath. Remember, this is not found in the Bible – it’s from the Talmud.

Chabad.org has an article about this stating the maximum walking range on the Sabbath is 0.596 miles or 960 meters, and this only applies to outside the city. Walking within the city isn’t limited. This rule comes from the Mishnah.

So one of the many Sabbath laws added by the Jews s that travel on the Sabbath also has a limitation. This is completely Jewish, and not explicitly identified in the Bible/Torah. So why is it in the book of Acts?

It’s in the New Testament because the book of Acts was written by Luke, a Jewish proselyte who was very familiar in Jewish culture. The walk is less than a half mile. It was permitted to walk that distance on the Sabbath when outside the city. Luke uses this phrase to help readers understand the distance which means this book must have been intended for a Jewish audience, albeit the Jews who believed in Yeshua as the Messiah. I find that fascinating that the New Testament would include such a purely Jewish phrase that focuses heavily on Jewish law and culture. Don’t you? Maybe the New Testament isn’t a “Christian” book after all? Maybe it’s every bit as Jewish as the Old Testament. In order to understand, we need to study Jewish 1st century culture. In order to pick up on these little details, we need to have sufficient knowledge of Jewish customs and laws; not just God’s laws, but the Talmud too!