And there were dwelling at Jerusalem Jews, devout men, out of every nation under heaven.

Men – This is a description of the day of Pentecost when the Spirit descended upon the followers of the Way. It wasn’t a fluke that so many people were gathered this day in Jerusalem. Who were these devout men, and why were they there?

In order to understand what’s going on, we need to delve into the text. Why would so many men be present here in Jerusalem at this time? No one knew that the Spirit was going to descend on this day. A few people knew some sort of strength from on high would be coming, but they didn’t know when. So there must be another reason why so many people would be gathered in Jerusalem on this day.

Where should we start to gain more insight? The law.

Three times a year, all males are to come to Jerusalem (that’s where God had the temple built) and present themselves before the Lord. This day was one of those days. We know that Yeshua died on Passover, so the next day all males were to come to Jerusalem was on the Feast of Weeks. After the counting of the Omer, 50 days from the weekly Sabbath during Passover was the holy day, Feast of Weeks (because we counted down the weeks). This is the reason all males from every nation were there in Jerusalem. They were celebrating the day that God gave the law to Moses. The Spirit descended on the people who were obediently keeping the law of God. Pause and let that sit for a moment.

The Greek word is anēr which literally refers to the male gender. Luke, the author of Acts, is relating to us that this day was a high Sabbath – the Feast of Weeks. Everyone was gathered in obedience to the law. This is how God identified those who believed… by observing their actions. Simply believing that Yeshua is real, or thinking that He is the Messiah isn’t what God is looking for. He’s looking for a people who live according to His teachings, and that have the testimony of Yeshua (Rev 12:17). God knew these were “devout men” because they were carefully and assuredly keeping the commandments. This is the definition of devout. 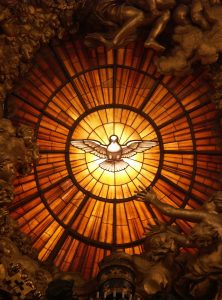 Think about this during the upcoming Feast of Weeks. Are you committing yourself in obedience? If so, you become a greater tool in the service of our Creator. The Spirit can work through you miracles, healings, and prophecies. Don’t let your rebellion be the blockade preventing these things from happening.

Can you imagine the prolific appearance of the Holy Spirit descending on any one person? Yes, when it appeared as a dove above Yeshua. Now think about it… Yeshua was the most obedient man ever, who lived by every law of God.